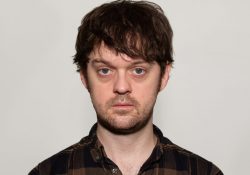 The online animator discusses his approaches to creativity, humour and the success of Salad Fingers. Samuel Hornsby hears his story.

The works of David Firth polarise audiences. Some will laugh whilst others will be horrified and disturbed. That is because he is the British animator behind some of the internet’s strangest and darkest cartoons.

The 38-year-old Leeds-based artist shot into internet notoriety through his series ‘Salad Fingers’ which revolves around a strange green man with freakishly long fingers and a love for rusty objects. Throughout the episodes the character struggles with loneliness and insanity in a barren landscape with only his finger puppets and other deranged individuals for company.

It may seem an unlikely hit, but the series has racked up more than 130 million views on YouTube. However, when David first started, he wasn’t thinking about fame, but rather to make funny videos for him and his friends to watch.

“The success of Salad Fingers was a surprise. I never expected I’d make something worth watching. It was always just for fun,” he says.

“I always went under the idea that I was never going to be an animator and I was not good enough to be an animator. So, anything I made was just as a joke or to see what was possible and what I could do.”

Suddenly things changed in 2004 when David found himself featured on the front page of the flash entertainment site Newgrounds which placed him in the limelight with thousands of eyes watching and eager for more.

“It was weird to suddenly have an audience because I had to really consider what I was putting out after that. Before then, I could put out any old crap and there was no expectation,” he says.

“The main thought was ‘I need to make more Salad Fingers’ because there was nothing else that I’d made in that dark style. It was new for me at the time.

“All these new people had to watch was crappy, very Northern in-joke cartoons that me and my friends came up with. I wanted to stay relevant and not be a fad.”

The popularity of Firth and the Salad Fingers series did not die down and instead the titular green humanoid has become one the most recognisable online cartoons. The series has spawned fan games, parodies, hundreds of reaction videos and the latest episode has amassed almost four million views to date.

“I think what has kept people interested in the Salad Fingers series after all this time is the fact that I don’t make episodes for the sake of it,” David says.

“It’s just about waiting until I’ve got a decent idea before I make one which can end up being a few years between episodes.

“Each episode has to innovate somehow to keep me interested, but I think that also keeps the audience interested. I don’t like the idea of repeating myself.”

It is not only with the Salad Fingers series where David keeps ideas fresh. Over the years his other animated projects have varied from the dark and twisted tales of the dystopian beetle-ran nightmare ‘Spoilsbury Toast Boy’ and the unnerving stop motion ‘Crooked Rot’ to light and silly series such as the low budget hijinks of fictional animator ‘Jerry Jackson’ and the ‘Burnt Face Man’ series which sees the plights of a superhero whose only power is, as the name suggests, having a burnt face.

Though these projects may get less views and attention, David sees this as a positive as he feels he can then experiment more with there being less of an expectation to please a wide fanbase.

“I’ve got more freedom on smaller projects because there’s no pressure to make something that’s crowd-pleasing. In fact, sometimes I do the absolute opposite and do something I don’t think could please anyone. Sometimes I’m surprised and it gets a warm reception.”

Occasionally the reception can be unexpected for different reasons though. As a result of the darker world of ‘Salad Fingers’ earning the most recognition, new fans are often surprised to find the more comedic side to his catalogue of work.

“Now when people watch something lighter that I do, say for example a new episode of ‘Burnt Face Man’, there’s always people who say ‘oh, he’s trying comedy now’ as if that wasn’t part of the work before.

“There are people in the comments of quite a lot of my videos arguing about whether they’re meant to be funny or not, but they’re always supposed to be funny. I don’t think I could make something dark without comedy being in there. It would be too serious, and I try not to take anything that seriously.

“When people act offended or upset by my work it only makes it funnier,” he says with a chuckle.

Comedy shows such as Chris Morris’ ‘Brass Eye’, ‘South Park’ and the work of ‘Reeves & Mortimer’ used to be a key inspiration for David’s work, but he now says he prefers to try and make videos that fill the gap he thinks is missing in entertainment.

Additionally, when approaching stories with a more fluid narrative David chooses to try and emulate the atmosphere of dreams. This is particularly illustrated with the anthology ‘Sock’ series which he writes by tapping into his stream of conscious.

The latest episode in the series sees a man named Nigel journey through a Kafkaesque surreal landscape engaging in nonsensical interactions and gets into a bizarre love affair with a talking cow called Craig.

“I like to take inspiration from the unpredictability of dreams,” David says.

“The whole point of making stuff is to make people feel things and to me, there’s no other feeling like being in a dream and it’s a feeling I think goes well with my style of animation.”

Though a dreamlike, unpredictable style is something present throughout David’s work, he explains that the process of animating itself is the opposite.

“There’s no spontaneity with animation because it takes so long to get them done. The benefit is that I feel there is something more timeless about animations. At least people might revisit them in the future.

“I just make what I feel like really. Sometimes I get halfway through a project and move onto a different one because it’s not the right one to do yet,” he says.

“I’ve got an episode of ‘Burnt Face Man’ that I’m going back to which I started back in 2019. I’ve also got another episode of ‘Not Stanley’ in the works. The dialogue in that was completely improvised about 10 years ago and I’ve just got around to putting visuals to it.

“I think I’m going to put out some more episodes of one of my earliest series, ‘Panathinaikos Bear’, out as well but not tell anyone. I’ll stick them on a second channel.”

As well as revisiting old series, he is always seeking new fresh ideas that might arise which allow him to experiment in new formats and styles.

“There’s a new abstract animation that I’m making that’s under the working title ‘Erosion’ because the images I’m using are quite eroded,” David says.

“That’s because I’m animating it first and then projecting the pictures onto dirty paper, but it won’t be called that when it’s done.”

David explains that he thinks he’ll always have more ideas for cartoons than time to animate, and they don’t show signs of stopping. So, whether filled with humour or horror, he will keep pursuing the strange and surreal in the world of online animation.