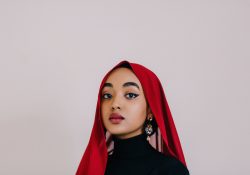 Khadisha Thomas the Somali poet and photographer about journals being the one thing she can’t live without, lack of diversity in literature, covid impact on arts and the BBC.

After the hustle and bustle of a moving weekend, Amaal Said is a friendly face on Zoom. She sips her Starbucks, excited about how she is preparing to live with her soon to be husband. However, when she isn’t getting ready for the big changes in her life, her poetry and photography takes centre stage.

Amaal is a Danish-born Somali poet and photographer based in London. Her photography has been featured in Vogue, The Guardian and The New Yorker. She is the winner of the Wasafiri Magazine New writing prize for poetry. Her photographs have been exhibited in Ghana for the fourth volume of the African Lens and exhibited in LA. Amaal grew up in a town called Odense in Denmark and then lived in Copenhagen for a few years. She moved to London at the age of eight.

For her, getting accustomed to her new surroundings was difficult at first because she didn’t know any English.

“I’m really grateful that I came over when I was young because I think when your younger language is a lot easier for you as opposed to being older… I was put in one of those classes that you’re put in when you don’t know English,” she says.

Writing was Amaal’s passion, growing up she would buy multiple journals for different purposes. In her office surrounded by shelves and boxes of books, she laughs as she lists her god, family and her books as something she can’t live without.

“I have all my books everywhere, they keep me sane.”

After stumbling across Tumblr she saw people posting their writing and realized she could do the same.

“I was always writing stories and I would keep diaries. I would keep one for my general thoughts, I would plan out blogs so one journal was for that and I had another journal that was for short stories.”

Watching people tag their writing gave Amaal the courage to share her writing. She was shocked to see so many people like her poetry. This gave her the confidence to apply for the Barbican Young Poets programme.

“I’m from a little corner in London, I’m on the border so I never used to travel to Central, I never went to art galleries, I didn’t have any link to art apart from the internet,” Amaal says.

She submitted her portfolio of poems to the scheme and to her surprise she was selected. This was when her digital bubble perished, and the once mystical world of art opened up to her. Amaal finally got to travel, go to events and meet like-minded individuals, however, she still felt out of place.

“It was mostly a shock because I wore a hijab and when I started there weren’t many poets of colour in that group. You just kinda see each other across the room and stick together. I felt like I didn’t belong, people like me don’t come here. The friends I grew up with had no idea what I was doing on the weekends,” she says.

For Amaal her poetry is inspired by family and mental health.

“I would use my phone and ask my mum questions, ‘tell me this story’ and I would go back and write about it. I was a really nosy child so I would listen to my mum’s phone convos.”

As a teenager growing up poetry became her way to express her feelings and deal with her issues. “It was a mixture of dealing with mental health as a young anxious girl and also things happening with family and trying to write through that muddled history and trauma.”

She thinks the poetry and works of women of colour are not widely consumed and she has always made a conscious effort to seek out and gain influence from women of colour. One of her favourite poets is Warsan Shire, who is also Somali British.

“She would write really beautiful poems about Somali women and Somali people and I had never seen that before.

“Things that were going on in my own home which I had never seen before. It was so sick!”

Amaal believes it’s important to read poetry from women of colour and that in the past poets of colour weren’t widely available because they were thought to not be marketable.

“I remember going to the library and literally searching out peoples names who look ethnic, because for me it was a political thing because if you’re not providing it I need to go out and support and read their work.”

She is part of Octavia, a poetry collective for women of colour. It was set up by her friend in response to the lack of representation of women of colour in literature and the academy.

With a freind, she attended a poetry collective where they were the minority and due to the ignorant comments and lack of understanding from other poets, they felt a space needed to be created where women of colour can feel celebrated.

“Of course it’s incredible you get to do poetry in these collectives but at the same time the type of questions, or feedback or conversations you get, are not conversations you’d be having if it was another woman of colour reading your work, there would be a general understanding because we’re dealing with similar struggles,” she says.

Since the coronavirus, working in the arts has been incredibly difficult and Amaal can attest to how this has affected her as a poet and a photographer. Due to travel restrictions she has lost out on work abroad. Lockdown has also hindered her from doing photoshoots as her job isn’t essential.

“It’s really difficult, I think you just need to have faith in yourself and belief in yourself, but also to figure out how to have a presence online.”

Despite this, she feels lucky that other opportunities have been presented to her . Unlike other creatives that rely on one sole talent to stream income she can switch back and forth between being a poet and a photographer.

“Funding is opening back up for artists to be able to do their own projects and right now I’m getting ready to start a Adobe artist development fund project, so I feel incredibly lucky to still be able to do what I do even though it hit me really hard in the beginning,” Amaal says.

She was part of the BBC 1Extra Words First, a partnership with Roundhouse that seeks to find the hottest and freshest spoken word talent from across the country. Amaal gave performances alongside amazing British poets such as George the Poet and Holly Poetry.

“We had a showcase and that was really beautiful because a lot of us got to write together and perform together. There was a film on BBC iplayer for a little while,” she Amaal.

Amaal’s most memorable moment from this experience was reading an important poem she wrote about her mother’s miscarriages.

“I remember reading that to her and her being like ‘oh I’m really grateful you wrote that because I don’t want to forget because it meant something and it’s good to remember even if it hurt.”

From a shy Somali girl as she describes herself, tapping away at a keyboard or scribbling down on a page, to a poet who’s performed on stages across the country. Amaal’s words have definitely made a lasting impact. What was once a coping mechanism, has now changed her life beyond imagination.

“Poetry for me means survival, I wrote poetry when I couldn’t write anything else… I was around a lot of people who didn’t understand me so I took it to the internet, blogs and then I took it to perform, and it became a way for people to connect to me.”

For her, the idea of making a career out of what she loved to do the most seem unimaginable so she’s delighted that she’s been able to.
She aims to continue living her dreams as an artist in all regards.

“When the pandemic started I was like ‘oh my god, what am I gonna do? Am I gonna have to put my politics degree to use and sit in an office?’, but no I really wanna be out there and chatting to people getting their stories,” Amaal says.

With hopes that things will go back to some sense of normality, we don’t doubt that she will be out there with her camera and powerful voice, championing the stories of women of colour.