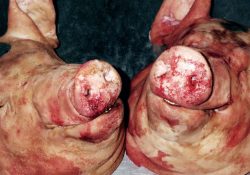 Armand Hammer and The Alchemist team up for a solid 40 mins blend of some of the finest talent in the game from both the East and West coast of America.

The Alchemist is a seasoned producer with three years of experience under his belt, honing his skills on the albums of some of hip hop’s greatest heavyweights. His back catalogue includes credits on the works of Nas, Ghostface Killah, Snoop Dogg, 50 Cent, Cyprus Hill, Kendrick Lamar and the late, great MF DOOM. As of recent, he also found acclaim through his collaborative project ‘Alfredo’ with Freddie Gibbs.

The man knows his way around a record and the production on this LP is sleek, stylish and imaginative. He ends up delivering a jazzy, abstract listening experience filled with glitched-out saxophones, rattling drums and the noise chirping crickets. It’s an engrossing sound that is grabbing and captivating enough to leave you sat there for its runtime satisfied, impressed and wanting more when the silence hits as the last track comes to an end.

On the microphone we have the cult New York duo ‘Armand Hammer’, made up of rappers Billy Woods and Elucid. They pump the album with dark lyrics that are loud, clunky and direct in delivery. It may not be the most graceful of lyrical displays with certain points starting to feel more like the kind of delivery you would find from vintage spoken-word rap units such as ‘The Last Poets’, but what it lacks for in finesse, it more than makes up for in effectiveness.

The contents is grim and grimy with the topics mirroring the cryptic beats and melodies in perfect harmony. The Alchemist and Armand Hammer feel in sync in their musical vision for the LP by presenting a project defined by the atmosphere both parties are working toward together.

Also sprinkled throughout the album are a fine selection of artist features including appearances from Odd Future member, Earl Sweatshirt and the distinctly deadpan voice of Quelle Chris. The latter of these examples, in particular, injects a lot of personality into their track turning it into one of the most memorable tracks on the album. Even if the appearance is only a fleeting glimpse it leaves a lasting mark.

Overall, ‘Haram’ is a brilliant blend of abstract and conscious hip hop contrasted with a darker hardcore edge. It is a meeting of the West and East coast and two unique styles in union to create a listening experience that provides both a bark and a bite.

Haram is currently available for streaming on Bandcamp, Spotify and YouTube Music. It can also be purchased from backwoodzstudioz.com both on CD and digitally.