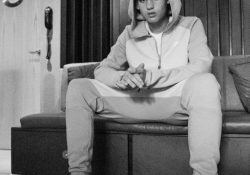 The 17-year-old artist talks to Khadisha Thomas about busking, signing to Columbia records and ‘Letter to Piotr’, a song dedicated to his late friend.

Cole Lawton who goes by the stage name Cole LC is the latest act to emerge on the UK music scene. He’s been compared to Ed Sheeran who he lists as one of his biggest inspirations and recently collaborated with high profile drill artist Double LZ. The rising star who crosses the genres of RnB and rap is played on national radio stations BBC Xtra and Capital Xtra.

At just 17 he’s signed a deal with Columbia records so it’s safe to say that he’s in his prime and has a long career ahead of him. However, before the music industry presented itself Cole was your average young lad hailing from Leeds.

“My earliest memory probably would be, you know them little yellow cars you get when you’re a kid, I remember running to one of those, I must of been in nursery, and I dropped and scraped up my arm,” Cole says.

He laughs as he reminisces on one of his sharpest childhood memories and over his belief that his mother wouldn’t be pleased that the only thing he can remember is his yellow car-induced casualty.

Growing up Cole states that in school his teachers described him as quite loud and a bit annoying. Cole jokes that if he wasn’t doing music he would probably be messing about in college somewhere in Leeds.

“I wasn’t the most perfect student in the world but I was an enthusiastic kid,” he says.

That enthusiasm was particularly directed towards the subject of music and being part of a family that had a strong passion for music was also a big influence to him.

“My parents were always into music and I was always into different musicians, and I had a lot of older friends who were rappers, so I’ve kinda always been around it. There wasn’t really a point where that was my choice.

“It’s always been a thing that I enjoyed and everyone that I looked up to has been in music, so I wanted to get where they were.”

Cole first sang to an audience when he took part in a school talent competition at age 12 but before he worked up the courage to perform, singing would be something he kept behind closed doors, that perhaps his family would hear only if they put an ear to his door.

“I was embarrassed because there weren’t many boy singers but then I did a talent competition at the end of Year Six and I won that” said Cole.

He was gifted a speaker a year later and decided to take it into the town centre where he started busking.

“I think busking is one of the best forms of promotion because you’re just giving the music first hand and that’s how I built up my ting,” he says.

According to Cole there was never a dull day on the shopping high streets of Bradford.

He smiles cheekily as he shares one of his busking experiences.

“I remember this one time these crackheads were walking past and they were like ‘you don’t deserve all that money, gimme that money, pack up and leave’ I was like ‘alright alright mate’ and then a guy from a shop come out and was like ‘leave him alone’.”

Cole believes that his days busking gave him even more drive and that without it he wouldn’t be as thick skinned as he is now.

“You got to be resilient and not care what people are saying or think because people will shout things or say things but they’re saying that probably just to get a laugh out their mates, they’re not trying to hurt you. You just got to take the negative things and brush it off. Most of the time the positives outweigh the negatives,” he says.

With nothing but a dream and a voice every weekend Cole set off to the streets of Bradford, but singing to the public could only achieve so much. To expand his reach he posted covers on the internet and he recognizes how integral the internet was to his success.

“I think it’s benefited everyone a lot, 100%, without the internet it would be harder for people to notice you. If you got a million people from different countries they’re the people who will take you to the top, not these men in suits. That’s the most important thing, people who are sat at home who can connect with your stuff.”

His covers received a lot of praise and soon enough they were seen by online platforms who noticed the teenagers potential.

It wasn’t long before Columbia Records, the label behind big UK artists like B Young, Deno and Da Beatfreaks, approached Cole.

“I was sat in my room with my mum when I signed it in quarantine which wasn’t ideal but it was good tho! It’s opened doors for me and it’s a whole new experience, it’s going into a whole new lid.”

Cole is amazed by all the support he gets from producers who have years and years of in-depth knowledge. The record label helps with ideas for music videos, cover art and he feels lucky to be in this position at such a young age.

“I feel like there’s more stability in what I’m doing, it’s not going out on the weekend trying to busk and earn a bit of money,” Cole says.

A few weeks ago his close friend, Piotr Piekara, sadly passed away and in his memory Cole made a heartfelt song for him called ‘Letter to Piotr’.
The experience has made Cole mature and see how vital music is to expressing his emotions. He doesn’t only want to make songs that people can vibe to, but songs that tell stories.

“The shock of it has really made me and everyone around me appreciate things more and makes me want to get the things out of my head that I want to be said or even the things I don’t want to be said but I’m gonna say it because I’m gonna regret not saying it in the future. Just want to share everything we’ve got because we might not always be able to.”

Despite dealing with the loss of his friend, Cole wants to keep pushing and is excited for what the future holds. As soon as lockdown restrictions ease and a sense of normality returns he plans to do gigs all whilst continuing to release mixtapes.

“It’s kinda what carries me to be honest, everywhere I go I have music on and I express myself through it, now it’s my job and yeah man it’s just everything really.

“It’s communication and it motivates me.”

It’s clear to see that music means a lot to this young man and with bangers like ‘Rollin’, ‘Grip N Slide’ and ‘Westbrook’, we can only anticipate what more he has in store.